What is a DAO (Decentralized Autonomous Organization)? 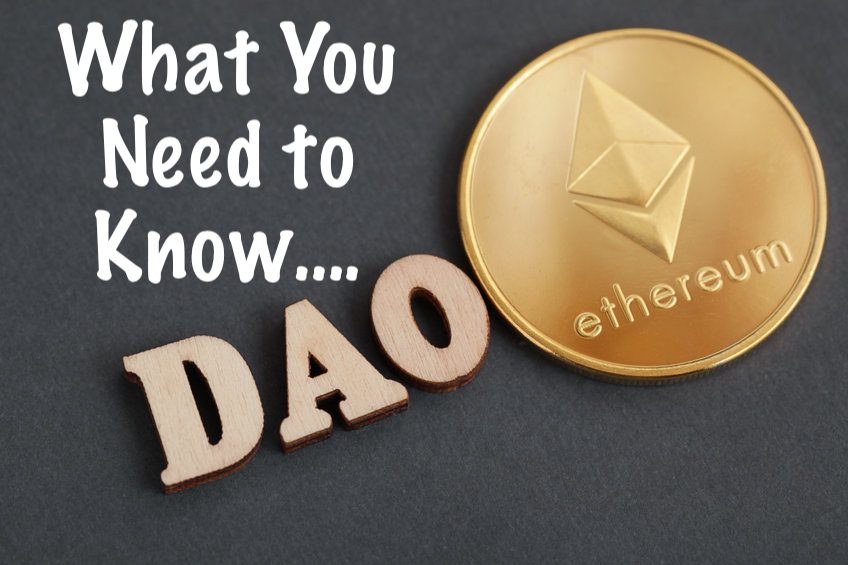 A DAO is a Community Run Democratized Organization

Decentralized autonomous organizations (DAOs) are community-based organizations with a common purpose where each DAO member participates in decisions. A DAO is different than other legal organization types since there is no CEO, board of directors, or c-suite executives. Wikipedia defines a DAO (Decentralized Autonomous Organization) as an organization represented by rules encoded as a transparent computer program, controlled by the organization members, and not influenced by a central authority. The DAO’s rules are embedded into the code. Accordingly, no CEOs, executives, or managers are needed. A DAO is a democratized community. There is no central leadership and decisions are made from the bottom-up. DOAs are owned and managed by their members. Members vote on the most important issues in real-time. A traditional organization or company is a bureaucracy governed by executives. Traditional companies are owned by the members or shareholders. Shareholders vote annually or even more seldom for executives who will make decisions on behalf of the shareholders.

The Importance of Smart Contracts to DAO Formation & Governance

A DAO uses token contracts – typically identified as a governance token – which allows the token holder to vote on issues to be decided, and to help decide those issues. Issues often revolve around governance, committee structures, working groups, and how to spend the cryptocurrency earned by crowdfunding the governance token sale, project contributions, or other sources of cryptocurrency funding. The DAO’s smart-contract rules are recorded on a blockchain. No one can edit the rules without people noticing, because DAOs are transparent and public. DAOs are fully autonomous and transparent. As they are built on open-source blockchains, anyone can view their code. Anyone can also audit their built-in treasuries, as the blockchain records all financial transactions.

DAOs can be set up to accomplish anything any other brick-and-mortar organization or company can achieve. Each DAO mission is different. Participation and voting rules are also governed by the DAO. DAOs often have access to a lot of money and spend time deicing how to spend that money based on the majority rule.

How to Form a DAO

The first step for any DAO is to create the smart contract which will code the rules of the DAO. The rules set by these contracts can typically be changed by governance token owners through the governance system. After the smart contracts have been created, the DAO will typically create a token sale – often times an NFT – to raise funds. Token purchasers are buying into membership and receiving participation and voting rights. Once the DAO is deployed on the blockchain the token owners decide the fate of the project and the DAO project creators typically turn over full control of the organization to the members through the coded community governance rules.

In 2017, the United States Securities and Exchange Commission (SEC) issued a report in which it determined that The DAO sold securities in the form of tokens on the Ethereum blockchain without authorization, violating portions of securities law in the country.

The Securities and Exchange Commission issued an investigative report today cautioning market participants that offers and sales of digital assets by “virtual” organizations are subject to the requirements of the federal securities laws. Such offers and sales, conducted by organizations using distributed ledger or blockchain technology, have been referred to, among other things, as “Initial Coin Offerings” or “Token Sales.” Whether a particular investment transaction involves the offer or sale of a security – regardless of the terminology or technology used – will depend on the facts and circumstances, including the economic realities of the transaction.

The SEC’s Report of Investigation found that tokens offered and sold by a “virtual” organization known as “The DAO” were securities and therefore subject to federal securities laws. The Report confirms that issuers of distributed ledger or blockchain technology-based securities must register offers and sales of such securities unless a valid exemption applies. Those participating in unregistered offerings also may be liable for violations of the securities laws. Additionally, securities exchanges providing for trading in these securities must register unless they are exempt. The purpose of the registration provisions of the federal securities laws is to ensure that investors are sold investments that include all the proper disclosures and are subject to regulatory scrutiny for investors’ protection.

Is Crowdfunding regulated by the SEC?

Yes, Crowdfunding is also regulated by the SEC and every DAO should seek advice from securities counsel before launching their token contract or raising funds. Exempt crowdfunding offerings must be made through a registered intermediary or crowdfunding portal. Regulation CF and Section 4(a)(6) of the Securities Act